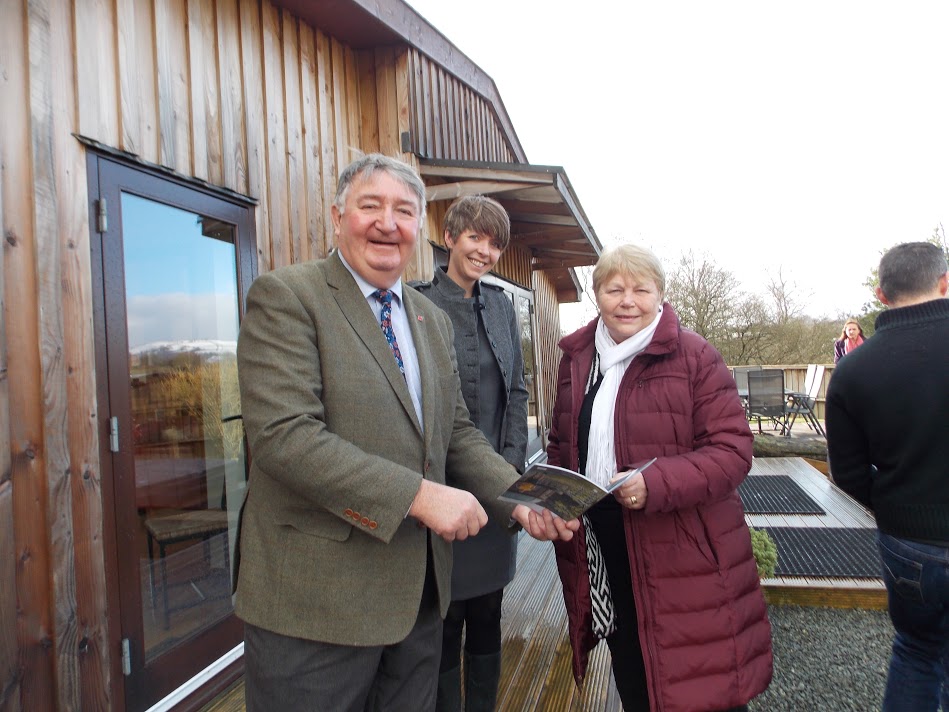 Last Friday Baroness Jenny Randerson, Minister for Wales, visited Lon Lodges in Nantmel, near Rhayader together with Roger Williams MP. The Minister was visiting and talking to inspirational Welsh businesswomen to see how the UK Government can increase opportunities for Women in Business.

Lon Lodges are owned and run by Kerena and Stephen Pugh. These are two lodges which offer five star accommodation on their family farm.  Kerena has been behind the project since 2004, with responsibilities ranging from planning and designing development, website design and management and booking and administration. Kerena has also set up walking routes to enable visitors to walk around the farm and enjoy the welsh countryside.

The success for the business as resulted in visitors returning annually. And Kerena also works as a mentor to help support others setting up in business.

“It was such a pleasure to visit Kerena Pugh at the excellent holiday Lon Lodges, near Rhayader. They are an example of a well-planned and well serviced accommodation meeting the needs of visitors to Mid Wales. She emphasised the environmental and nature richness of the area with well-produced leaflets encouraging visitors to walk through this picturesque countryside. It is not surprising given the success of this venture that Kereena has been asked to be a mentor for other women entrepreneurs in Wales.

“I was interested to hear that Kerena was brought up in the Elan Valley Hotel run her parents. Many small businesses in Mid Wales depend on women as well as men to make them viable. So Kerena had a role model in her mother and she is now using that encouragement to run a business that compliments her husband farming enterprise. When I walked in to the lodge I just felt I wanted to spend the weekend here. That is as big a compliment as I can give.”

"Encouraging and supporting women to venture into business is an essential part of creating a stronger economy and fairer society, so I am determined to do what I can to get more women in business.

"But we need to do much more so that women in Wales can seize the opportunities available to them to succeed in business."

Across Wales, the UK Government is supporting working women by helping with childcare costs – from autumn 2015, a new tax free childcare scheme worth up to £2000 per child for almost 2 million families. Since 2010, there are 9,000 more women in employment in Wales.