Jane Dodds, Welsh Liberal Democrat Member of the Senedd for Mid and West Wales, was among the line-up of speakers at a public meeting where Crickhowell residents shared their concerns about plans for a new Co-operative store in the town.

The event last Thursday (2nd September), was organised by Welsh Liberal Democrat Councillor for Crickhowell John Morris, and local campaigners from the Crickhowell and District Civic Society, was held outdoors in the grounds of Crickhowell Castle and attended by almost 200 people. 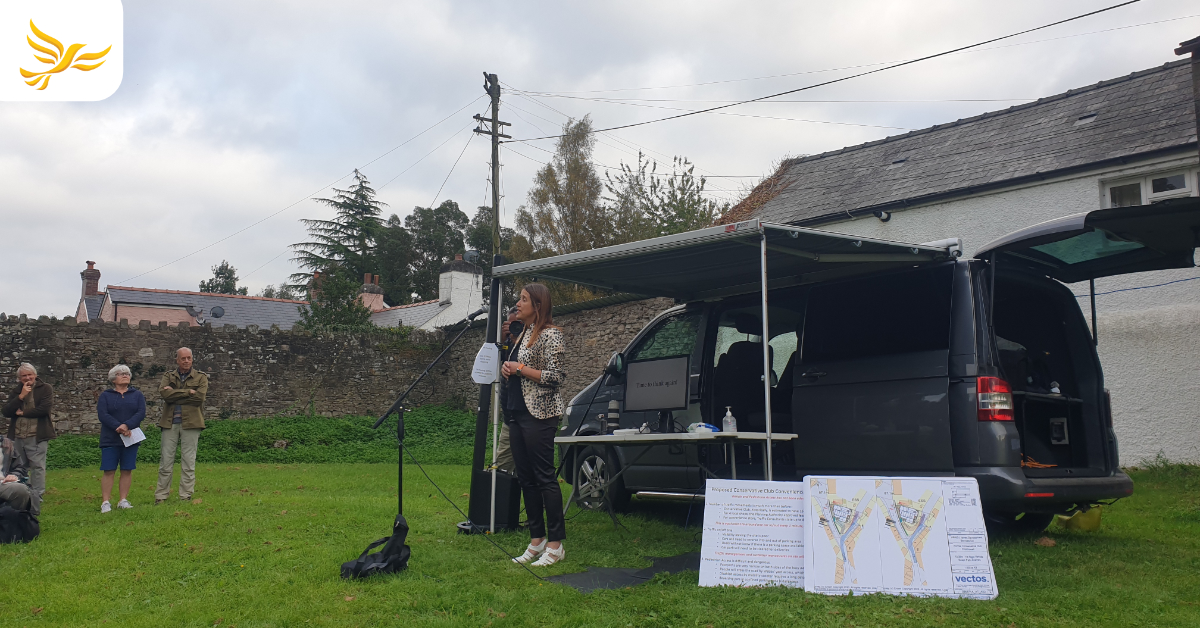 The supermarket development, situated on the site of the town’s old Conservative Club and near the very busy A40 trunk road, was approved by the Brecon Beacons National Park Authority.

Heavy traffic in Crickhowell has a knock-on impact for other communities in the Usk Valley area, such as Llangattock, Bwlch, and Llangynidr.

“The overwhelming majority of Crickhowell locals who have spoken with me about this issue and those who contributed to the meeting last Thursday was deep concern about the traffic conditions that already exist in the town, due to a huge and growing volume of vehicles, particularly lorries and campervans, passing through the narrow roads everyday.

“Add to that the many hundreds of new cars and delivery lorries, that could be visiting the Co-op store on a daily basis, and you could have a situation that becomes dangerous.

“There are worries about insufficient parking space at the site and the nearby pavements being too narrow for pedestrians to feel safe, particularly children and wheelchair users.”

“That could also make accessing Crickhowell more difficult for people in the area who rely on the town for access to essential services such as their GP, dentist, and pharmacy, as well as high street shops.”

“The Co-operative and its’ developers have ridden roughshod over the views and objections of many in the community. They have not properly engaged with Crickhowell residents on how to make their development plans safer, causing real worry in the town.

“I am taking this issue up with the Co-operative and Welsh Government and will continue to work with local campaigners.”