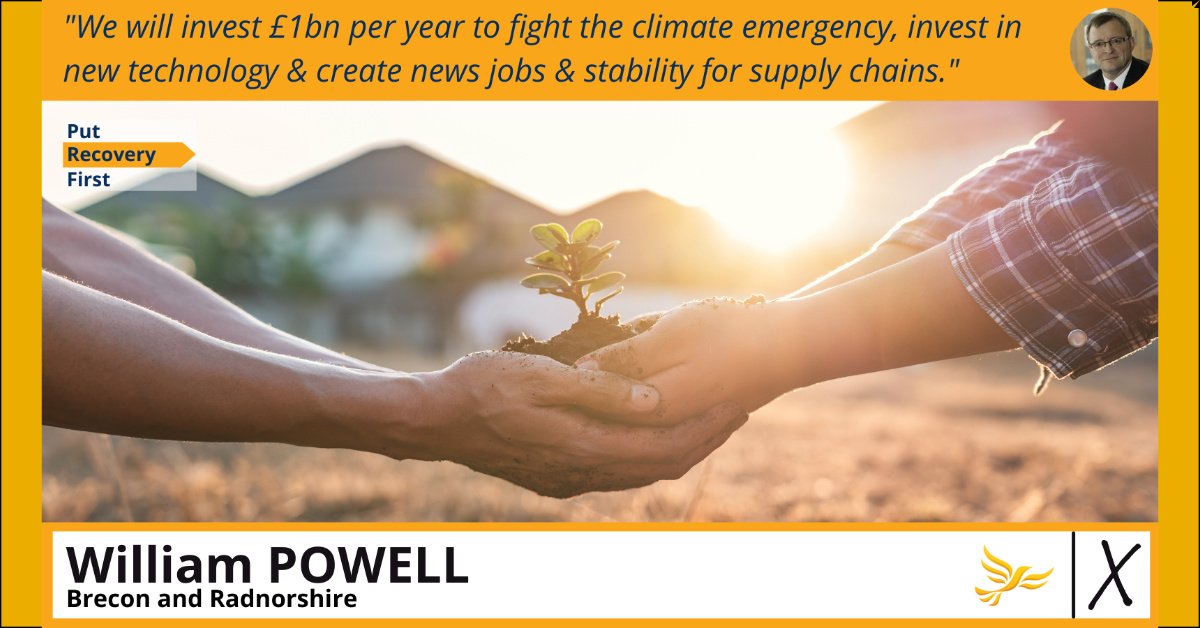 A year ago, it seemed that the world had come to a consensus on the need to take the perils of climate change seriously. Countries across the globe had recognised that rising temperatures and pollution were not just an environmental issue, but an economic and security issue. But with the election of Donald Trump in the US and Britain’s vote to leave the EU, the tides of isolationism and populism could halt or even reverse the progress that has been made.

The Conservatives seem determined to take Britain back to the 1980s, when the UK was the ‘dirty man of Europe’. They have cut support for renewable energy and home insulation, sold off the Green Investment Bank and failed to control air pollution.

Liberal Democrats are determined that we live up to our environmental obligations.

That’s why we will pass five green laws:

a Green Buildings Act, and

a Zero Waste Act to incorporate existing EU environmental protections, maintain product standards such as for energy efficiency, and establish a framework for continual improvement.

Air pollution in the UK is a killer. It contributes to 40,000 premature deaths a year and costs the NHS £15 billion. That’s why the Liberal Democrats will pass a Green Transport Act, introduce an Air Quality Plan to reduce air pollution and protect UK citizens and support the manufacture of low-emission and electric vehicles, generating jobs and exports.
This plan will include:

• A diesel scrappage scheme, and a ban on the sale of diesel cars and small vans in the UK by 2025.
• Extending Ultra-Low Emission Zones to more towns and cities.
• All private hire vehicles and diesel buses licensed to operate in urban areas to run on ultra-low emission or zero emission fuels within five years.
Prevent 40,000 deaths a year with our Air Quality Plan to reduce air pollution across the UK.
Give the immediate go-ahead to Swansea Bay tidal  lagoon to generate sustainable growth in the region.  Ensure farming remains competitive and doesn’t lose out – refocusing support towards producing healthy food and public goods.
• We will also reform vehicle taxation to encourage sales of electric and low-emission vehicles and develop electric vehicle infrastructure including universal charging points.

In government, we championed green energy, and oversaw the trebling of renewable electricity generation. But the Conservatives have repeatedly cut support for green energy producers – damaging the environment and costing British jobs. Liberal Democrats will expand renewable energy, reducing carbon emissions, cutting dependence on fossil fuel imports and generating more jobs and prosperity.
We will:
• Set up a British Housing and Infrastructure Development Bank to mobilise investment into the low carbon and sustainable infrastructure the UK needs to remain competitive.
• Support the Paris Agreement by ensuring the UK meets its own climate commitments and plays a leadership role in international efforts to combat climate change.
• Expand renewable energy, aiming to generate 60% of electricity from renewables by 2030, restoring government support for solar PV and onshore wind  in appropriate locations (helping meet climate targets at least cost) and building more electricity interconnectors to underpin this higher reliance on renewables.
• Support investment in cutting-edge technologies including energy storage, smart grid technology, hydrogen technologies, off-shore wind, and tidal power (including giving the go-ahead for the Swansea Bay Tidal Lagoon), and investing heavily in research and development.
• Support an ambitious carbon capture and storage programme, which is essential for delivering clean industrial growth.
• Oppose ‘fracking’ because of its adverse impact on climate change, the energy mix, and the local environment.
• Accept that new nuclear power stations can play a role in electricity supply provided concerns about safety, disposal of waste and cost are adequately addressed, new technology is incorporated, and there is no public subsidy for new build.
• Maintain membership of Euratom, ensuring continued nuclear co-operation, research funding, and access to nuclear fuels.

At over £1,200 a year, the cost of heating and lighting an average home in the UK is too high – and with a falling exchange rate, costs will rise further.
Liberal Democrats will reduce energy bills permanently by improving home insulation and encouraging small�scale, community and local authority renewable schemes. We will make saving energy a top infrastructure priority, slashing energy bills and carbon emissions, creating thousands of jobs and helping end the fuel poverty crisis once and for all.
Throughout the UK we want to;
• Ensure that at least four million homes are made highly energy efficient (Band C) by 2022, with priority given to fuel-poor households.
• Expand community energy schemes, encourage councils to develop community energy saving projects and local electricity generation and promote city-scale demonstration projects in electric vehicles and clean energy.
• Continue to back new entrants to the energy market, aiming for at least 30% of the household market to be supplied by competitors to the ‘Big 6’ by 2022.

Our natural environment is precious. The countryside, biodiversity, wildlife and urban green spaces are critical to health, wellbeing and a sense of community. The quality of the environment also underpins key industries such as agriculture and tourism.

We will:
• Ensure that the conservation of nationally important natural and cultural environments is balanced with local accountability and sustainable economic activity

• Reverse the current sharp decline in the rate of woodland creation and protect remaining ancient woodlands.
• Suspend the use of neonicotinoids until proven that their use in agriculture does not harm bees or other pollinators.
• Introduce stronger penalties for animal cruelty offences, increasing the maximum sentencing from six months to five years.
• Clamp down on illegal pet imports through legal identification requirements for online sales, and minimise the use of animals in scientific experimentation, including by funding research into alternatives.

Britain’s economy fails to make the most efficient use of natural resources. We aim to cut waste, increase recovery, reuse and recycling and move towards the so�called ‘circular economy’ in which resource use, waste and pollution are minimised and product lifetimes are extended.

We will:
• Benefit consumers by promoting better product design to improve repairability, reuse and recycling.
• Building on the success of the plastic bag charge, introduce a 5p charge on disposable coffee cups to reduce waste.