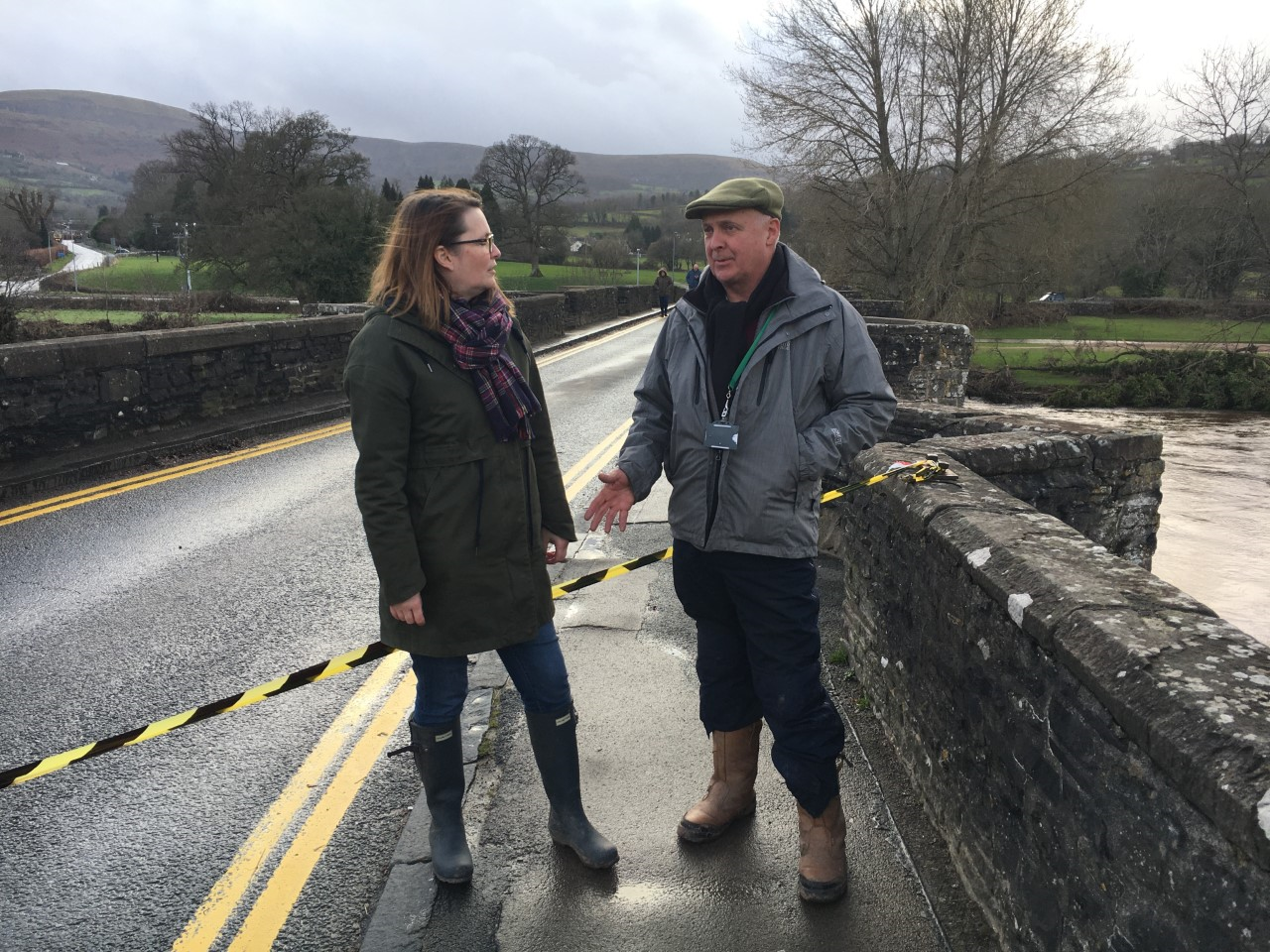 Kirsty Williams AM and Local Welsh Liberal Democrat politicians in Brecon & Radnorshire have been reacting to the weekend’s catastrophic weather events, which saw communities in the constituency including Ystradgynlais, Builth Wells, and Crickhowell, impacted by severe flooding in the wake of Storm Dennis.

In Crickhowell, Llangattock and Llanelwedd, which were particularly badly hit, Welsh Liberal Democrat Councillors John Morris (Crickhowell), Jackie Charlton and Maureen Mackenzie (Llanelwedd) have been working with Powys County Council officials, the emergency services and local volunteers to assist residents whose homes have been flooded with emergency accommodation and supplies.

“This is going to be a really difficult time for the Crickhowell community and, sadly, some people are now facing significant damage to their homes, property or livelihoods.

“People have been extraordinarily generous in the past 48 hours, many have been offering shelter to friends, neighbours and strangers.

“It is really important to get a clear list of all the residents who are unable to return to their homes.

“If you need direct support over the coming days you can contact your Welsh Liberal Democrat Assembly Member Kirsty Williams, Llangattock Cllr Jackie Charlton or myself. We are here to help.

“We have months of drying the house out I fear, but this is the same for a lot of residents. I have been struck by the kindness and solidarity of neighbours and members of the community."

“It is important to remind people that many places are still flooded or water-logged and people need to take a lot of care. Especially during half term, I would urge parents to make sure that children are not playing anywhere near the water.”

“It has been a sombre day visiting Crickhowell with Cllr John Morris and Llanelwedd with Cllr Maureen Mackenzie and I will be visiting more areas tomorrow. There has been a huge amount of damage to homes, businesses and community facilities.

“Our communities are doing all they can to support one another, but they are going to need a lot of help from all levels of Government to recover. I will be arranging to meet with Natural Resources Wales and Powys County Council and reflect on any lessons learnt.

“I am holding advice surgeries on Thursday, at the CRiC Centre in Crickhowell from 11:00-12:00 with Cllr John Morris, and Talgarth Library from 14:00-15:00 with Cllr Bill Powell. Please do get in touch with my office to book an appointment.”

Information about the Welsh Government Discretionary Assistance Fund can be found here: https://gov.wales/discretionary-assistance-fund-daf

Help us build a brighter future for our communities