Roger Williams MP, the Mayor of Brecon and the Chairman of the Ghurkha Welfare Trust in Wales were present at a celebration of Dashain with the Mandalay Platoon of Ghurkhas who are based in the Infantry Battle School in Dering Lines. 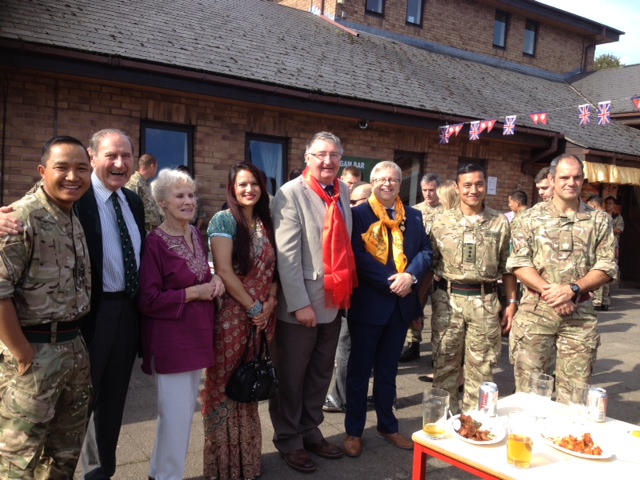 Dashain is the most auspicious festival for Nepali people.  It celebrates the triumph of good over evil and the defeat of Demons by the Gods. It is celebrated for 14 day s in Nepal, but the Ghurkhas in Brecon only celebrate it for 4 days.

The Mandalay Company of Ghurkhas has been reduced to a Platoon with the number of soldiers falling from 125 to 65.

“It was great to join the Ghurkhas in their celebration with a feast of Ghurkha curries and other delicious food.  Even though the Ghurkha numbers have fallen to 65, there are now in excess of 70 civilian Ghurkha families in Brecon who are very well integrated and form an important part of our community. I have recently been involved in work to find funding for a support and liaison officer to ensure that all Ghurkha families including some of the more elderly who have come to Britain recently have the support that they need.”

The picture includes Roger Williams MP, Mr Sandford the Mayor of Brecon, and Lt Frank Batton MBE the Chairman of the Ghurkha Welfare Trust in Wales.  Also pictured is Sgt Dipprasad Pun CGC (the Conspicuous Gallantry Cross is the second highest award for bravery in the face of the enemy awarded by the British Army after the Victoria Cross).  Sgt Pun CGC, gained his award for outstanding bravery in the face of an attack by Al Qaeda in the Helmand province in Afghanistan.